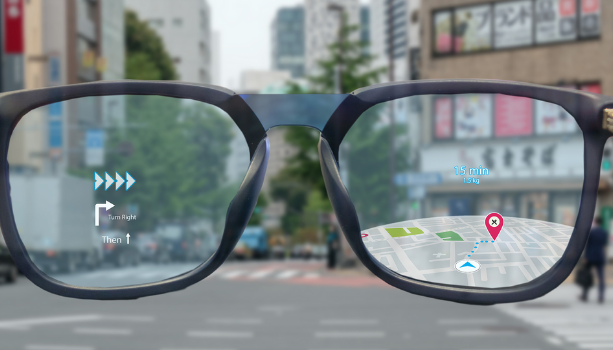 Just like the glasses in these animations, AR glasses (augmented reality glasses) are getting ready to hit the market. AR glasses allow users to watch videos, find directions and work with documents through the display reflected on the transparent glasses.

​AR glasses are expected to become a next-generation technology that will replace smartphones, and many IT companies thriving to input more investments and efforts to develop the technology. Being able to do things that were possible only with applications on computers or smartphones basically means that you can put a virtual world on reality through a pair of glasses.

​’Google Glass’ is a representative example of smart glasses that will replace smartphones and AR glasses.

Google Glass, which was first released in 2013, a year after declaring the ‘project class’ in 2012, continued its software and hardware updates until 2014 in order to realize itself as a wearable computer. Users can make most of Google Glass through voice recognition features and Google applications, however, due to its high price, privacy, and safety issues, the sales were discontinued just after two years of its product launch.

After experiencing a bitter taste in the B2C market, Google Glass launched the Enterprise version, ‘Google Glass Enterprise Edition’ in 2019. The biggest difference from Google Glass 1 is that the target audience has changed from consumers to businesses owners.

When wearing Google Glass Enterprise Edition 2, even when new employees learn to work, they can use the AR technology reflected from the glasses and learn work from experienced employees, and it can also be used in the future by converting the process into a database. In addition, remote maintenance and telemedicine services for products or services that require finer details can be efficiently utilized in various industrial sites.

In 2015, Microsoft also developed an augmented reality device called ‘HoloLens’ while Google Glass was having difficulties in commercialization. In fact, Microsoft’s HoloLens 2 is used on construction sites at Bentley Systems and socially distanced work environments at the oil company Chevron. In addition, AR glasses can be actively used in the tourism and education industries.

​Both Google Glass and HoloLens showed the potential growth of the AR glasses market, but the number of use cases is still low and is mainly for industrial use. Ultimately, it is predicted that software performance development is necessary to increase public usability that must be accompanied by hardware development such as product weight reduction and design.

The prospect of AR glasses is rising as a next-generation competitor between Samsung Electronics and Apple. As the video of Samsung’s first AR glasses, ‘Glass Light’, was leaked in February, it was predicted that Samsung’s development to preoccupy the AR glasses market will begin in earnest, and the rumor has it that Apple will release its AR glasses this November.

Samsung Electronics and Apple are the two largest global manufacturers, and each has proven products that can be used in conjunction with AR glasses, such as smartphones, smartwatches, and Bluetooth earphones. In addition, with advanced technologies such as 5G, blockchain, and cloud, as well as global trends in semiconductor and display performance improvement and weight reduction, things are expected to further expand the AR glasses market. Even if it takes time, it seems that Samsung and Apple’s participation in the AR market is essential for AR glasses to become popular.

The Issues with AR Glasses ​

The issue that comes to mind most easily is the issues that come with the invasion of privacy. In fact, Google Glass was never able to enter the market because it had a real camera that could take pictures. If everything you see can be recorded and shared, concerns about privacy are expected to rise, and it is only possible to eliminate the issue by not loading the camera.

​Also, it is not free from safety issues either. Although AR is relatively safe because, unlike VR, it does not show a completely virtual world. However, it still has the potential to cause physical accidents such as blurred vision and dizziness. Therefore, new safety standards and training sessions are required prior to the purchase.

​The fact that the entire system is based on 5G or cloud technology in order for AR glasses to rapidly send, receive, and store large amounts of information makes people wonder about new security problems that may arise when it is linked with other things to facilitate the collection and utilization of various data.

​The Internet of Things (IoT) refers to a technology that analyzes information collected through objects connected to the Internet and provides services based on the analysis. Currently, IoT technology is closely applied to our day-to-day lives, such as through smart home devices, smart factories, and smart cars, and in order for AR glasses to function and become popular, IoT technology must be applied without any problems just like these devices.

​Therefore, when AR glasses are connected with IoT technology, it is critical for IoT security to be deployed prior to the connection:

3) Security on the server that processes the collected data

4) IoT infrastructure security as the basis of the system

​Encrypted communication is essential because the device itself requires verification through a certificate whether to check if it is a trusted device before any connection, and the gateway in charge of collecting device information and transmitting it to the server can also become vulnerable to hacking. IoT security can be realized only when the database, certificate, and encryption key stored in the server and infrastructure are safely protected.

Penta Security, a leading cybersecurity company, provides cryptographic modules that can be used in various IoT infrastructure environments. Penta IoT-CC (Cryptographic Core) is provided in the form of firmware that can be used not only for security products, but also for IoT devices that have restrictions on module capacity and weight, such as AR glasses, and boasts low power and lightweight.

​Not only has it acquired the National Intelligence Service KCMVP certification, but it also has numerous use cases, providing excellent security functions in various places. Click here for more information about Penta IoT-CC.